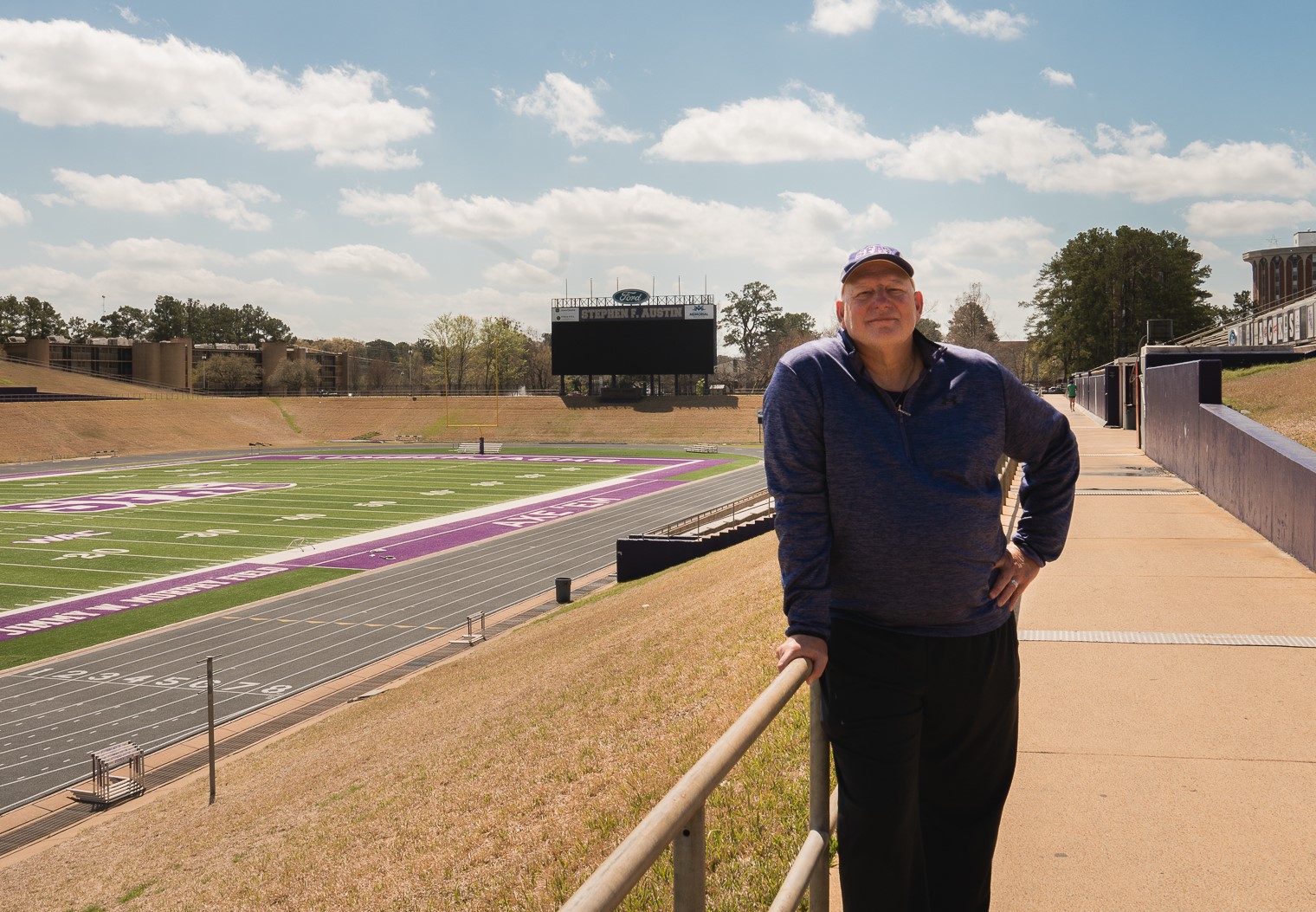 “This crucifix that I wear,” the coach explained, reaching for the crucifix he wears around his neck, “I got it from Mike Tomlin, who is the (Pittsburgh) Steelers coach. He always wears it at game time. Even though I bring the Faith into our program, this is the first thing that people see. Because I want them to know there is faith here.”

Convert to the Catholic Church

A 1986 SFA graduate from Fort Worth, Phil met his wife Donna during his graduate studies on the East Coast.

Phil was not Catholic when he married Donna, a cradle Catholic, but they agreed to raise their children Catholic. Phil explained, “When Donna and I got married in 1995, we made the agreement that we would raise our kids Catholic and I would go to church on Sunday, whether I wanted to or not. And we did.”

It was several years before Phil entered the Catholic Church, but he continued to go to Mass each Sunday with Donna and their children, Addie and Tobie. Phil recalled having deep discussions with Donna about Church teachings.

“Donna and I used to have conversations about pro-life versus pro-choice. I grew up in a household that felt it should be a woman’s choice whether to have a child or to abort the child, or use contraceptives. We had the biggest debate about that.”

Although there were disagreements, they discussed things in a positive way. “We were very respectful of each other, even though Donna knew I was wrong,” Phil said with a joyful laugh. “Now I can say I’m very pro-life.”

In 2000, the Olsons moved to Nacogdoches, where Phil became the head coach for track and field at SFA. Phil came into the Church eight years later with the help of Father Jessudoss Thomas, the chaplain at St. Mary’s Catholic Campus Ministry at SFA.

“Father Jessudoss was almost like a spiritual adviser to me and really got me into getting confirmed and coming into the Church,” Phil said. “It took a while for me to latch onto the Catholic Faith, but man, I just fell in love with it and I’m just trying to be a better Catholic every day.”

Becoming a better husband, father, and servant leader has been a process of growth, deeply influencing Phil’s life as a coach.

“It’s been a growth thing for me. Growing into a Catholic man and a Catholic leader,” Phil described. “There was a big struggle. It was really hard because I was used to coaches who would scream and holler and curse if they had to. Finding ways to push buttons on their athletes to try to make them better.”

Phil explained his solution, “I started reading leadership books on how to be a better coach. How to lead a program. And here I am now 60 years old and I’ve come so far in the last 22 years.

“Everything that I do now is based upon faith,” Phil added. “My faith in God, doing God’s will, loving others even if I don’t like them. Everything I do is as a Catholic husband, father, and especially the servant leader part of it. Because I can really be selfish. I could sit on my butt all day, not do anything, and pretend to be a leader. But sometimes, you gotta get down and dirty and do what needs to be done to get things accomplished.”

One way Phil brings his faith into his coaching is through prayer. His team prays at the end of team meetings and meets. Phil’s athletes also know that if they ever need prayers, they can count on their coach to pray for them.

“My prayer list for my team is like this long,” Phil said, using his hands to demonstrate the length of the list, which is about a page long. “It does my heart good to be able to pray for a young man or a young woman on the team or a family member, because that’s the best I can do.”

There is also an open invitation to attend Mass when the team travels. “When we would be on the road, I would say, ‘Anybody who wants to go to church, I’m going at this time, and you’re welcome to come with me,’” Phil explained.

For Phil and his team of coaches, community service is a big part of their program. Athletes are challenged to get involved in the community and participate in the Sacred Heart Food Bank in Nacogdoches.

“Our coaches and our kids have really taken that challenge because a lot of times it’s from 8:30 a.m. to 10 a.m. It’s not very long, but it might be every two weeks that they need help,” Phil commented with a smile.

Supported by the sacraments

Becoming a coach with a faith-based athletic program at a secular university has been a process that has encouraged Phil to keep Christ at the center of his life.

“It’s been a long process,” Phil remarked. “Even to the point where in the last six months, the process always changes. If I’m not connected with the Lord, and if I don’t make Jesus Christ the Lord of my life, how can I do that for them?”

To accomplish this, Phil relies on the sacraments, especially the Eucharist and confession. When he first became Catholic, Phil remembered not really paying attention to Christ’s presence in the Mass. After his conversion, it took several years of learning, growing in, and analyzing the teachings of the Church before Phil could appreciate the Mass.

“Now it’s the beginning, middle, and end of everything. If I can’t be fed spiritually by true food and true drink, then I’m nothing,” Phil observed.

Throughout his years of coaching, Phil has experienced a significant number of successes. But it’s not the athletic accomplishments that make him the most proud.

“The professional stuff doesn’t mean as much to me. Yes, we’ve had some great success, there’s been a lot of wonderful things that have happened,” Phil explained. Rather, it’s the spiritual and familial accomplishments that mean the most to him.

“Seeing our student athletes go out into the world and become successful and become God loving, God-fearing men and women and having families of their own. Kids that come in as being the poorest students and being unstable financially, making a life and continuing to grow in their faith, to me, that’s the most important accomplishment,” Phil said.

“I mean,” Phil said with a pause, “he’s my best friend! And to grow like that has been amazing for me.”

All pictures provided by Phil Olson.