Pray and Don’t Lose Heart: What St. Monica Teaches us about Persistence in Prayer 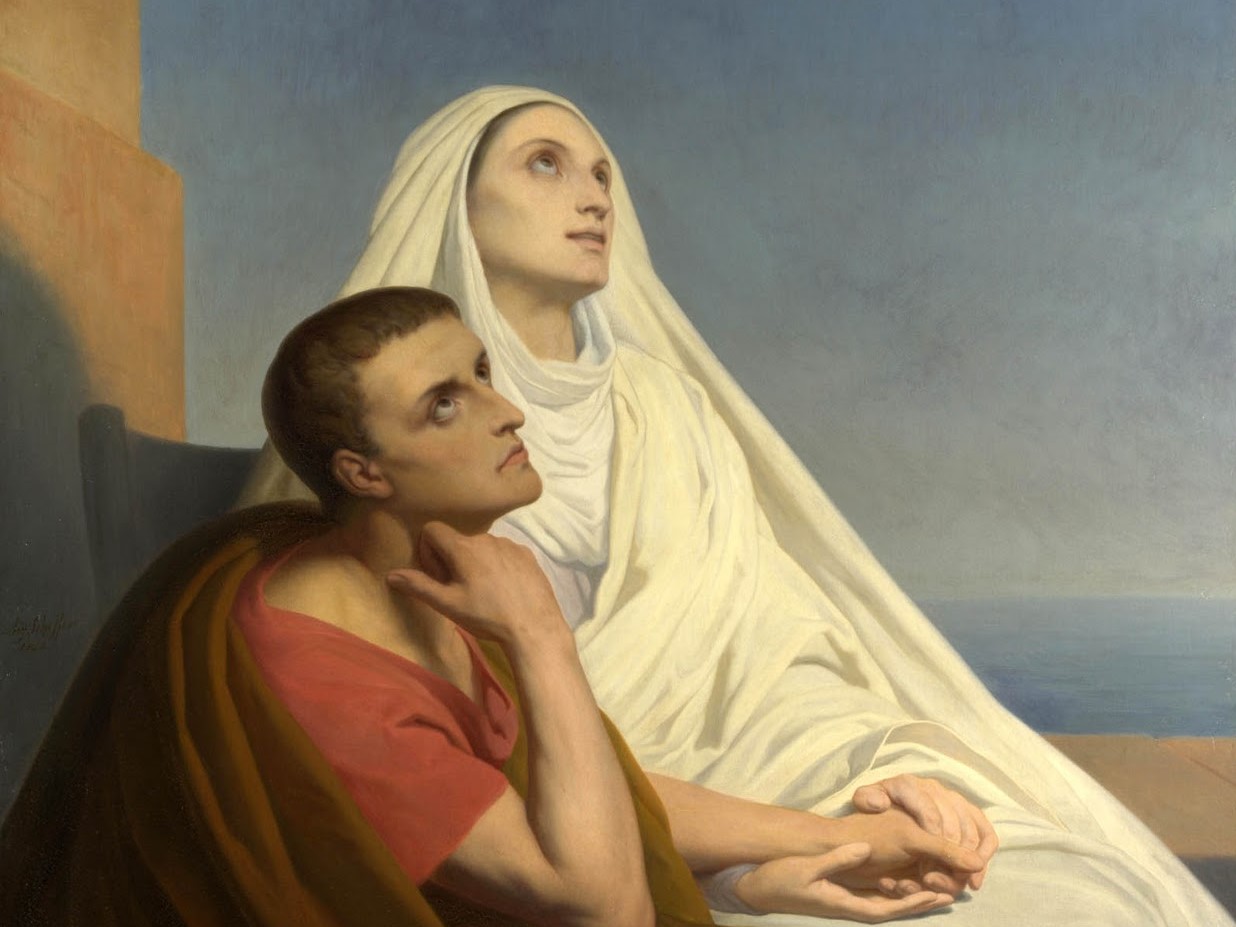 St. Augustine of Hippo has been an influential figure in my life for many years. The best way I can describe the role Augustine plays in my life is to say he’s like a favorite uncle that shows up and takes care of things just when I need him.

When I wanted to learn how to pray with Scripture, Augustine taught me through his Confessions. A master catechist, Augustine has not only taught me the faith, he’s also helped me understand how to share that faith with others. Augustine showed me that no matter how dark the sin, God’s grace is always ready and abundant. I believe Augustine was even influential in helping me get my first job in parish ministry, as my first day in the office was his feast day, August 28th.

Although Augustine has been a major influence in my life, lately his mother, St. Monica has caught my attention. In the liturgical life of the Church, we celebrate Monica’s feast on August 27th, the day before the feast of her son Augustine.

When we look at the life of Augustine, his impact on the Church and the world are clear. A bishop who died in 430 A.D., Augustine is a Doctor of the Church and is known as one of the greatest theologians in history. Even the renowned St. Thomas Aquinas was a follower of Augustinian theology in many key areas. Over 1500 years after his death, Augustine is still changing the world, and in many ways I am who I am today because of Augustine.

In the life of the Church, we hear a lot about Augustine. However, I frequently wonder what the world would be like if it had not been for his mother, Monica. In many ways, we have the great St. Augustine because of the persistent prayer of Monica.

In Luke 18 we find the parable of the Widow and the Unrighteous Judge. This passage is worth reading in full:

Then he told them a parable about the necessity for them to pray always without becoming weary. He said, “There was a judge in a certain town who neither feared God nor respected any human being. And a widow in that town used to come to him and say, ‘Render a just decision for me against my adversary.’ For a long time the judge was unwilling, but eventually he thought, ‘While it is true that I neither fear God nor respect any human being, because this widow keeps bothering me I shall deliver a just decision for her lest she finally come and strike me.’” The Lord said, “Pay attention to what the dishonest judge says. Will not God then secure the rights of his chosen ones who call out to him day and night? Will he be slow to answer them? I tell you, he will see to it that justice is done for them speedily. But when the Son of Man comes, will he find faith on earth?”

As Jesus says, “pay attention to what the dishonest judge says.” In this story we have a judge who did not care about God or any other human being. He does not care if his judgements are right and just. He does not care about the people that come to him for help. But he finds himself in a situation where a persistent widow is asking for help. And what does the judge do? He gives her a just decision, not because he is a good man nor because he wants to help her, but because she was persistent, and he wanted her to leave him alone.

Then Jesus points out something profound. If the unjust judge would give the widow a just decision because of her persistence, how much more will the all just, merciful and loving God give to his followers if we persist in prayer?

But what does it mean to be persistent in prayer? Is it 15 minutes of persistence? A week? Maybe a year? Let us turn to the example of St. Monica, who models true persistence in the spiritual life.

Monica was a Christian woman who lived from 332-387 A.D. As a young woman, she married a Roman pagan who had a violent temper. Monica and her husband had three children, the oldest of whom was Augustine, born in Africa in 354 A.D.

Life at home for Monica and her family was not happy or peaceful. Monica’s husband was prone to angry outbursts, and would often vent his rage on his wife. Chaos and fighting were frequent. Monica wanted to raise her children in the Christian Faith, while her husband wanted his children, in particular Augustine, to be rich and famous, steeped in the successes and glories of the world. Throughout his childhood and into adulthood, Augustine was a cause of anxiety for Monica.

When Augustine was seventeen years old, he left home to attend school in Carthage. While there the ways of the world caught his attention, and he spent his time chasing success and surrounding himself with comfort and luxury. For many years he lived with a woman that was not his wife, and they had a son together.

Augustine became a student of Manichaeism, which is a branch of the Gnostic heresy. Gnosticism teaches that there is a good god and a bad god. The good god is the god of all things spiritual and the bad god is the god of all things material. As a result, all material things, including the body, were viewed as evil. While a follower of Manichaeism, Augustine would often mock Christianity, a religion which holds that God himself took on a human body, as being ignorant.

Monica never gave up praying for Augustine, nor indeed for her husband. Shortly before his death, Monica’s husband did convert to Christianity and was baptized because of Monica’s prayers and example.

After her husband’s death, Monica followed Augustine to Rome and then Milan. It was in Milan that Monica and Augustine met St. Ambrose, who was influential in bringing about the intellectual conversion of Augustine. In Milan, Augustine finally became a Christian after Monica had spent seventeen years praying for his conversion.

Seventeen years! I often wonder what would have happened if Monica had given up at some point. If Monica had decided that God simply was not listening after ten or fifteen years, would we have St. Augustine, Doctor of the Church, today?

Six months after Augustine’s conversion, Monica died in peace, knowing her son was now striving to follow the Lord.

Before anything else, become a person of prayer.

Back to that question from earlier, “What does it mean to be persistent in prayer?” Throughout her life, Monica shows us what persistence in prayer means: it is the work and dedication of a lifetime.

We are so quick to give up on prayer when things do not go our way. We get tired, discouraged or frustrated. We feel that God does not hear us or that he does not care. The passage from Luke quoted earlier makes it clear that this is not true. God does hear those who are faithful and persistent. And by his grace, our prayers will be answered.

This is the lesson I think Monica can teach our world today. As Christians, we need to focus more on becoming people persistent in prayer.