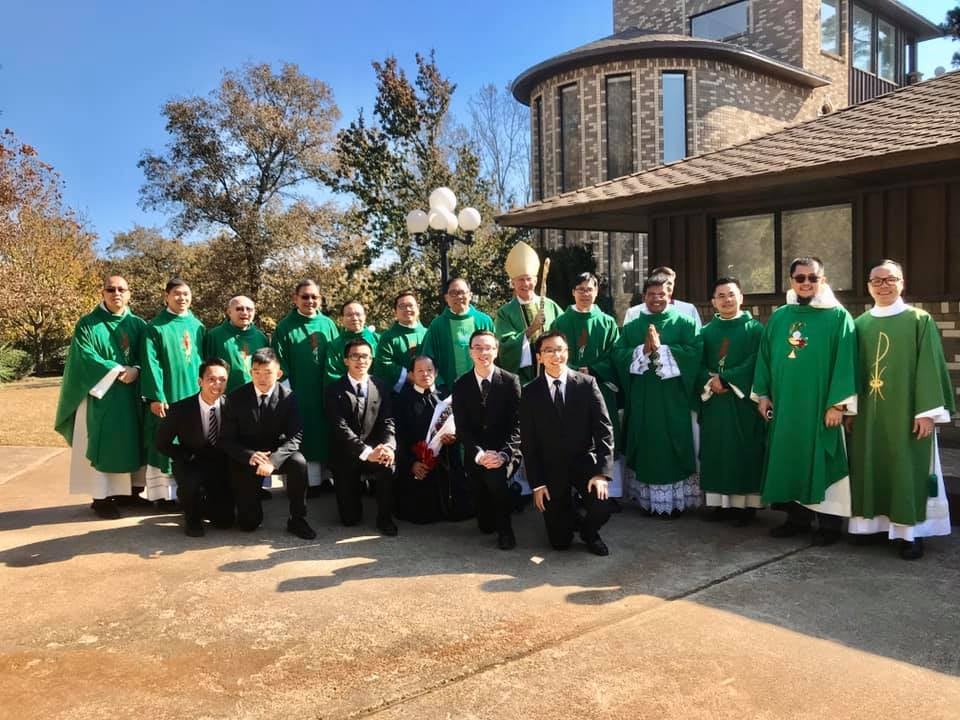 As a diocese spanning over a significant geographical area, the Diocese of Tyler is a home to a great diversity of peoples and cultures. Many people have found a home in East Texas and are blessed to be able to grow in their faith here in the diocese. This is true for many of the Vietnamese immigrants who have settled in East Texas over the years. Large numbers of faithful Vietnamese Catholics have moved to this diocese, and they have come with a desire to have their spiritual needs met.

In an effort to serve these faithful immigrants, the Vietnamese Redemptorists, with the permission of Bishop Strickland, established a monastery in the Diocese of Tyler in the latter part of 2019. Three members of the Redemptorist order, two priests and one brother, now reside in the St. Alphonsus Monastery in Winnsboro. Rev. Dominic Long Nguyen, CSsR is the Rector of the Monastery, and to help him in his service to the Vietnamese communities are Rev. Joseph Toan Lai, CSsS and Brother Tom Hoang-Thong Nguyen, CSsR.

Although many are likely to have at least heard of the Redemptorists, the history of this religious order is often unknown. The Congregation of the Most Holy Redeemer (Congregatio Sanctissimi Redemptoris in Latin), was founded by St. Alphonsus Liguori in Scala, Italy in 1732.

Born in 1696 to a noble family from Naples, Alphonsus was a promising youth who did not initially pursue a religious calling, but pursued law instead. “Alphonsus was one of the smartest kids at the time,” Fr. Dominic explained. “He was both a canon lawyer and a civil lawyer. He practiced being a lawyer when he was only eighteen years old.”

Fr. Dominic continued to tell the story, explaining how Alphonsus promised himself when he became a lawyer that he would never lie, and went on to dedicate his work as a lawyer to the defense of the poor.

Alphonsus never lost a case until one day while defending a poor person against his wealthy accusers. Although Alphonsus was well prepared, the wealthy accusers bribed the judges, and as a result, Alphonsus lost the case.

“But it was very obvious that it was wrong,” said Fr. Dominic. “He was so sad. He walked out of the court and said, ‘World, I know you now.’ Because, he knew the mess of the world. So, from that moment on, he decided to withdraw himself.”

After a period of fasting and prayer, Alphonsus decided to become a priest. Once ordained, he realized that while there were many priests working in Rome, in Scala, a town south of Rome, the people were being spiritually neglected. There were many shepherds and poor people living in Scala and Alphonsus quickly understood that not only were these people materially impoverished, but more importantly, they were spiritually poor. Inspired by their plight, he dedicated the rest of his life to serving those materially and spiritually poor, and he founded the Redemptorists to continue this mission.

As a result, the order was named the Congregation of the Most Holy Redeemer. Fr. Dominic explained that their mission is “the continuation of the mission of Jesus. It is always in unity with the poor and with the most abandoned. So, wherever the poor or the most abandoned, especially in the spiritual sense, we want to reach out to them.”

The Vietnam War was the longest and deadliest war of the 20th century. In April of 1975, South Vietnam was taken by the Communists in North Vietnam.

“That was a historic day for all of us as Vietnamese,” Fr. Dominic explained. “As Vietnamese, we never forgot April 30th of 1975. It was the day that we lost the South to the hands of the Communists.”

Their first task has been to assess the needs of the Vietnamese communities in the diocese. This has been a slow process, especially because of the Covid-19 restrictions that hindered their progress in March of 2020. Though they are still learning the needs of the diocese and meeting the people of East Texas, Fr. Dominic said they feel like this is their family now.

Fr. Dominic explained that many Vietnamese find East Texas an attractive place to settle. It is a peaceful and quiet place, away from the noise and stress of large cities. For many Vietnamese families, their primary concern is access to the Sacraments. They want to be able to live in a place where their families can participate in the Sacraments in their own language and culture. As a result, the Redemptorists have found that many Vietnamese families come to the Diocese of Tyler because they know the Redemptorists are here to take care of their spiritual needs.

The St. Alphonsus Monastery sits on over 35 acres of land. The house is made up of multiple units, each unit consisting of a common room, kitchen, bathroom and bedrooms. Sometimes families will come and stay in one of the units at the monastery to rest and enjoy the peace and silence. Portions of the house were built in the 80’s while the newer section of the house was added in the 90’s. It is in this newer section of the house that the chapel is located. Once the office for the previous owner of the property, it is now a beautiful center of worship for the Redemptorists and those that visit them.

The monastery is a peaceful place, with many spots to sit in silence and encounter the Lord in prayer. If you enjoy the silence of the desert or of the jungle, the St. Alphonsus Monastery is the place to visit. All are welcome to come here to encounter Christ.